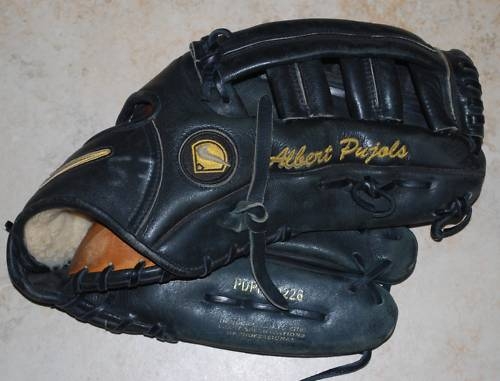 Albert Pujols game used 2002 glove that has a COA from Jeff Sullivan. Shows outstanding game use from a full season. What makes this glove even more special is "57" is written in silver next to the "Nike" logo to honor Darryl Kile. I purchased this glove from Jeff Sullivan who purchased the glove from Rob Steinmetz. Rob Steinmetz stated on Game Used Forum:Rob Steinmetz ([email protected]) (Login RobSteinmetz (http://www.network54.com/Profile/RobSteinmetz)) Re: Pujols Glove November 11 2005, 10:10 PM Yes, I own the exact glove in that photo of Pujols hugging LaRussa after the sweep of the D-Backs in the 2002 NLDS. It's a spot-on photo match. That's certainly one of the cornerstones of my Pujols collection. The glove was also carried over to 2003 Spring Training, which is why it shows far more use than the photo depicts". According to the Pujols Foundations Site Pujols Gamers by Rob Steinmetz : 2002: Pujols played primarily OF in 2002, but also spent some time at 3B and 1B (and even a few innings at SS!). As a result, a few different glove types exist. Pujols used both black and dark tan Nike gloves in 2001, with his name embroidered in yellow on the thumb of each glove. Beware of Nike gloves that show excessive use and have strange initials hand-written on the inside or outside of the glove. It is known that Pujols gifted many unused Nike gloves to relatives and/or friends in the Dominican Republic, who used the gloves and later sold them in the United States as Alberts gamers. Rob Steinmetz was a friend of the Pujols Foundation and was the top collector of Pujols items in Pujols early years with the Cardinals.. His web site was called authenticgamers.com .