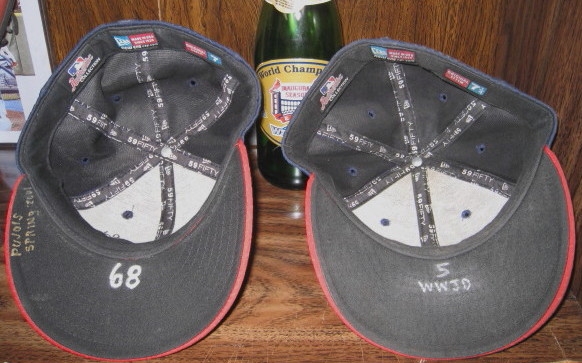 Hat on left is from Spring of 2001 and was one of his first Hats. The hat came from the Jeff Sullivan Collection. The Hat on the right is 2002 with DK and #57 on front for Darryl Kile. Darryl passed away on 6-22-2002. The 2001 Hat was purchased from American Memorabilia and American Memorabilia describes it as follows: 2001 Albert Pujols Signed Spring Training Hat, His First Hat with the Cardinals Albert Pujols wasn't supposed to make the Cardinals parent club in 2001. Rather, he figured to get some seasoning in the minors before someday becoming a major leaguer. Tenaciously, though, he cracked the roster and here offered is his first Cardinals cap, issued to him in Spring Training. It's a size "7" mesh hat showing moderate use, with "68" written on the underside in silver paint pen. (The number is also applied in black felt tip on the inside.) "Pujols Spring 2001" has been written in gold paint pen on the underside as well. Albert gave his endorsement with a stunning signature ("10") on the front in silver paint pen. One of the more significant Pujols hats which comes from the Jeff Sullivan Collection. It has a PSA House Letter.