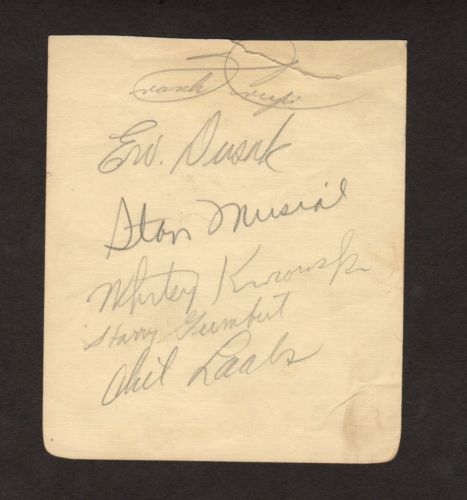 The Seller I received this from stated the following:Stan Musial was a late season call-up for the St. Louis Cardinals at the end of 1941 and this sheet of autographs from 1941 includes "Stan the Man" During one of the games he was involved in during late 1941! The autographs on the sheet are all St. Louis Cardinals and Browns players and include a couple late 1941 call ups and also a few guys who were out of baseball after 1942 so this is 100% a 1941 signature of Stan the Man. I have NEVER seen another signature of Musial that absolutely dates to his Rookie Year! Dated on the back as being from 1941. Two signatures on the back not shown are Roy Cullenbine and Bob Harris (both 1941 Browns players). Small rip at the top which affects the Frank Creepy Crespi autograph but is nowhere near the Musial! The other autographs from the 1941 team are Erv Dusak, Whitey Kurowski, Harry Gumbert, and from the 1941 St. Louis Browns is Chet Laabs. Stan Musials first game with the Cardinals was on September 19, 1941 at the age of 20. Cullenbine, Harris, and Laabs played for the 1941 St. Louis Browns. Crespi, Dusak, Kurowski, and Gumbert played for the 1941 St. Louis Cardinals. A roster of the 1941 St. Louis Cardianals can be seen at http://www.baseball-almanac.com/teamstats/roster.php?y=1941&t=SLN . JSA Authenticated Certificate Number: X56060 Signer: 1941 St Louis Cardinals - / St Louis Browns Field: Baseball Description: Multi Signed Sheet Manufacturer: Not Visible Size: 4 1/2" x 5 1/8" V Number Of Signatures: 8 Location: Front / Back Writing Implement: Graphite Pencil Color: Grey Notes: HOF(s): S.Musial KEYS(s): F. Crespi/ E. Dusak/ W. Kurowski/ H. Gumbert/ C. Laabs/ R. Cullenbine/ B. Harris